The holidays should be about gathering together with friends and family, reconnecting, sharing memories and making new ones.

This isn’t a time for stress and worry. You shouldn’t have to fret over cooking for days to feed everyone. Just give us a call and let our Holiday To-Go Menu be your answer.

Order a complete meal, or add a few of our dishes to your own cooking. Whatever makes the holidays easier for you.

Our Holiday To-Go Menu is just a click away.

It might seem a bit too early to be thinking about a Mardi Gras Ball, but we’re already in high gear for carnival season in Mobile and Baldwin Counties! 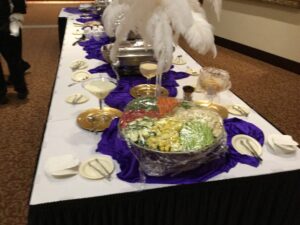 Planning a catering for a Mardi Gras is nothing short of a military operation. There are lots of details to consider to make it all happen, What’s the menu going to be this year? Is there a theme we need to incorporate? How many guests will be served? What about the members’ room? Will we provide bartenders? So many questions.

But when the big day comes, all those questions ahead of time prove their worth. The members and their guests enjoy a fun evening of Mardi Gras merriment. The food is served without a hitch. The drinks flow freely.

And afterwards, the Georgia Roussos crew cleans up and prepares for the next big event!

Georgia and Nate were rock stars on WKRG’s Take Five, talking about our Greek Salad and the Taste of Mobile 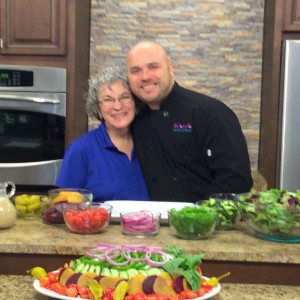 Y’all were WONDERFUL! The food was excellent. The presentation was lovely, too!

We could not have been more pleased with your service. EVERYONE raved on the food. It was our biggest asset for Corey and Josh’s big day.

Everyone had a fantastic evening and was overly pleased with the food and service that you provided.

Please thank your staff for doing an outstanding job for our Seafood Buffett yesterday. The food was delicious and the service was great, as usual.

Thank you Georgia, it was another great experience again.

I can’t thank you and your staff enough for making me look like a hero.

Thank you so much for everything your staff did to help us have an awesome event!

While we knew the food would be great, we were amazed by the level of service you provided and how smoothly everything went.

Just wanted to let you know that we had an EXCELLENT DINNER last night. Everyone raved about the Gumbo as well as the Pecan Crusted Chicken.

Thanks! The food was great, everything looked pretty, and the bosses were very happy.